Hydraulics is a neologism from the Ancient Greek terms “hydro” (water) and "aulos" (pipe). In general, hydraulics deals with the flow behaviour of liquids. In the particular case of the construction machinery sector, it deals with power and energy transfer using liquids.

In 1600, Johannes Kepler invented the gear pumpThe oil volume enclosed in the gap between teeth is conveyed from the intake to the discharge side of the pump by the turning of the gear, displaced to the contact point of the wheel and forced into the pressure connection.. However, at first this invention had no consequences. Blaise Pascal laid the foundations for the further development of hydraulics with the “hydrostatic law”. In 1663, he elucidated the principle of the hydraulicThe use of liquids to transmit force and energy. press. Joseph Bramah is considered the founder of hydraulics technology. 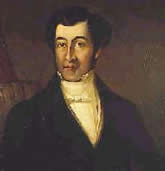 From a historical point of view, the Englishman Joseph Bramah (1749 - 1814) (right image) is seen as the founder of hydraulics technology.

In 1795, he developed a machine powered by pressurised water, which increased the force applied 2000 fold.

The year 1905, when Williams and Janney first used mineral oil as the transfer medium for a hydrostatic transmission driven by axial pistons, marks the beginning of oil hydraulics.

The first power steering system was developed by VickersVickers Limited was an important British mechanical engineering and defence group founded in 1828. In 2004, BAE Systems acquired the Alvis group and incorporated Alvis Vickers into its military division, BAE Land Systems. (in 1925), who also developed the first pre-controlled pressure valve in 1936.

These inventions provided the basis for modern hydraulics technology.

Three different types of hydraulic power transmission can be differentiated:

The pump and motor proportions are very similar in hydrostatic drives. The structure is usually a finger piston pump (axial piston pumpAxial piston pumps come in swash plate, bent axis, and wobble plate constructions and are designed for the medium and high pressure ranges.). The pump housing is position axial to the drive shaft. Inside is a ring with cylinder bores arranged in circles, in which finger pistons are deployed in the same arrangement. Axial piston motors are used both in industrial applications (e.g. heavy machinery construction) and in mobile working machines. The design is usually that of hydraulic motorsHydraulic motors or hydromotors convert the energy generated by hydraulic pumps back into mechanical work. Many pumps can be used as hydromotors as well without changes to the construction.. They can have a constant or variable displacement.

Hydraulic cylinderConverts the energy from the hydraulic fluid into a simple linear force.s are used to generate a linear movement.

The principle of how a hydraulic pump works

The fundamental advantage of these hydraulics systems lies in the separate construction method: the hydraulics can be perfectly adapted to the machine using freely moveable pipes and tubes. This is also made possible thanks to the great power of the comparatively small components.

Furthermore, these systems offer other advantages, such as:

Practical experience shows the disadvantages of the hydraulics system to be:

Due to their specific advantages and disadvantages, hydraulic drives are often used in mobile working machines such as construction or agricultural machinery. In these machines, loads are mainly lifted and lowered by hydraulic cylinders that move linearly.

Further examples of typical applications are:

More on the subject of hydraulics: 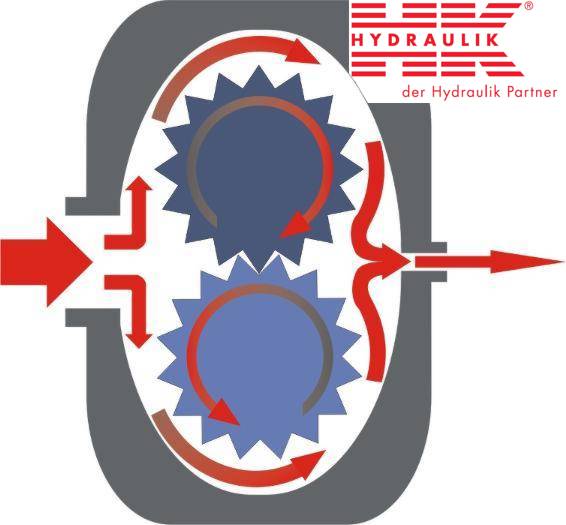 The gear pump is a device for the transport of liquids and the power transmitting propulsion of hydraulic motors. It is a sub-type of displacement pumps. A gear pump transports the medium to be pumped uniformly (regardless of the hydrostatically caused pulsation), and can bear average pressures of up to ca. 300 bar. As in all hydraulic systems, the pressure is adjusted against a load by transporting the medium. If the load increases, the pressure rises. The means of propulsion for hydraulic power converters in construction machinery, tractors, and in craft and industry, especially vehicle construction.